At an event hosted by the Employers’ Initiative on Domestic Abuse (EIDA) on Thursday 26th November, attended by over 500 representatives from businesses across the UK, Christopher Evans, Joint CEO of Collinson; Nick Read, Global CEO of Vodafone; and Dermot McDonogh, COO of Goldman Sachs International, each spoke about the commitment their companies are making to address domestic abuse in all its forms.

The event occurred within the backdrop of the second lockdown, a period that campaign groups and organisations in the domestic abuse space fear has been just as dangerous as in March, for those for whom home is not a safe space.

Collinson, Vodafone and Goldman Sachs are three of seven founding members of the EIDA’s new Beacon programme which commits employers to drive business awareness and action, as well as providing pro-bono services to other organisations. The further four founding Beacons are Lloyds Banking Group, Annington Homes, Marston Holdings, and Slaughter and May.

The Beacons have also encouraged their employees to download the free BrightSky app, which provides support and information to those concerned that someone they know is experiencing domestic abuse.

The EIDA is an increasingly influential membership body for businesses that want to do more to support their employees and prevent them from harm. The launch of the Beacon programme marks a step change in corporate involvement in tackling domestic abuse, and has been welcomed by the Business Minister Paul Scully: “Employers have a vital role to play in lifting the lid on domestic abuse and supporting survivors in the workplace, and EIDA are doing excellent work to help businesses tackle this sensitive issue.”

Lorraine O’Brien, CEO, The Employers' Initiative on Domestic Abuse, said: “During lockdown employers can offer a lifeline to those experiencing abuse, by being the one source of daily communication that someone has outside the home.

“The role of employers in tackling domestic abuse has become even more important during the pandemic and ongoing commitment from high profile and influential employers will mean not only support for their own workforce, but will add value to the wider aim of stopping domestic abuse in all its forms, once and for all.”

With domestic violence on the rise during COVID-19, and the boundaries between work and home increasingly blurred, it has never been more important for companies to offer their employees tools and support that can be a lifeline for those in need.

Christopher Evans, Joint CEO, Collinson, continued, “Companies are only part of the solution, but we all know that taking a public stand on issues such as domestic abuse helps to raise awareness and reduce stigma. Which is why we hope every company will join us in creating a corporate bulwark against domestic violence.”

Nick Read, Global CEO, Vodafone, said: “Domestic abuse affects so many in our society in all industries, all companies and at every level of seniority. Vodafone’s commitment to tackle domestic abuse is evidenced by our on-going work in raising awareness of the issue, our support for Vodafone employees, our offer of free resources to all employers so they can take action too, and our role as an EIDA Beacon.”

Dermot McDonogh, COO, Goldman Sachs International, said: “We owe it to all of our people to provide a safe and supportive environment. Equally, as we start this important journey to educate and inform and to raise awareness, we want to give our support to this issue so those affected in our communities can have the courage to take action. We look forward to working with EIDA and bringing energy and commitment to our role as a Beacon.” 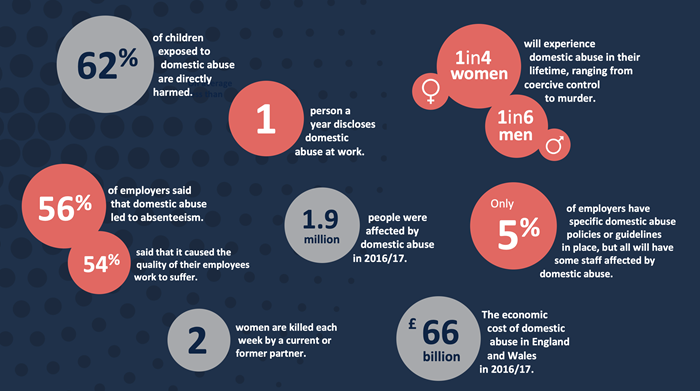