How the battle for business travellers is transforming airport lounges 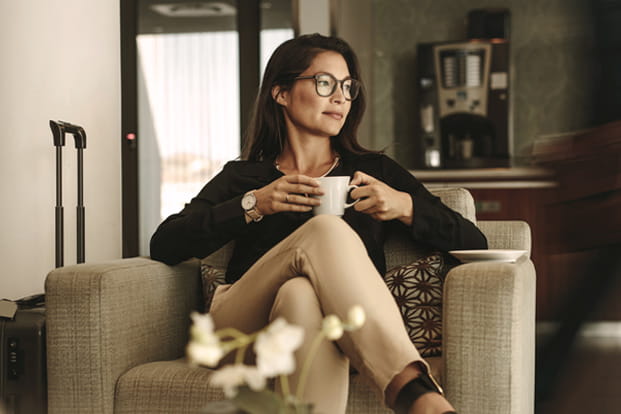 For frequent business travellers, the amount of time spent on the road can often seem to outweigh time spent in the office. Taxis to airports, airport check-ins, immigration, lounges, boarding, flight time, transits, followed by even more taxis. It’s an arduous routine for frequent flyers – and one that adds up to a US$ 1.2 trillion business travel market [1].

It’s in this context that airlines, airports and other institutions are increasingly seeing the value of investing in better airport lounges with more space, exceptional services and better technology to lure the business travel dollar. With this in mind, here’s what to anticipate from airport lounges in the future.

The Art of Design

Lounges are not meant just to keep loyal frequent traveller comfortable but are also an important marketing tool to attract and retain new business travellers. What used to just be a rather neutral space to pass the time, get some simple food and drink and Internet access is now becoming more of a destination in its own right.

Qantas passengers at Heathrow airport for instance can sip gin in the modern-minimalist settings of the lounge cocktail bar, or guests of Japan Airlines’ First-Class Lounge at Tokyo can withdraw to the library with a sake or a Japanese craft beer.

What is key to lounge design now is for the space to embody local flavours, rather than just be identical around the world. Last year’s winner of the Priority Pass Annual Lounge Awards was Club Kingston at Jamaica’s Kingston Norman Manley International Airport. Its Jamaican flair included  artwork and décor sourced from across the island, as well as traditional Jamaican food and drink.

With the introduction of such high-end facilities comes greater exclusivity. There are an increasing number of lounges or experiences popping-up that are exclusively for first class passengers – with Lufthansa setting the bar when it comes to private facilities. Travellers must have a first class ticket or be a member of the airline's HON Circle (a status that requires clocking up 600,000 air miles in two years) but if you are one of the lucky few and happen to be changing planes at Frankfurt you can take a Porsche out for a spin while you wait.

The introduction of premium lounges is not limited to airlines; we are also seeing a wave of lounge program launches, with many independent lounges which allow access to those who otherwise wouldn't get the lounge experience. They predominantly target cost-conscious business travellers who are flying economy but still want to escape the busy terminal. You can expect to see more lounges such as these tailored to the demands of different types of travellers.

Airports have become some of the most technologically advanced buildings in the world.  Biometric enabled self-service check-in facilities and bespoke mobile phone applications designed to help navigate airport processes, from check-in to boarding, and bag drop to shopping, are all testament to this.

Airport lounges are moving into the digital field too. Etihad, Emirates and Aviapartner have all tapped into virtual reality (VR) technology, introducing VR entertainment technology. More than a form of entertainment, the airlines hope that the development of this type of technology could also allow them to provide more personalised end-to-end entertainment solutions across all customer demographics.

And only this year Collinson announced a partnership with indoor mapping and wayfinding specialist LocusLabs, to bring new contextually-aware mobile technologies to the Priority Pass app.

The first of its kind, the new technology aims to change how users experience airports and airport lounges. It will be easier for App users to locate lounges in each area of the airport and to track how busy lounges and different airport facilities are, including security and car parks.

There is huge potential through big data and data science to help airlines and airports alike to get closer to customers than ever before, establishing patterns in passenger behaviour and thus better tailoring services to accommodate them.

The business travel industry is becoming increasingly dynamic and competitive as international travel for work becomes more common than ever before too. Amidst this drive we’ll continue to see innovation not only up in the air, but on the ground too.